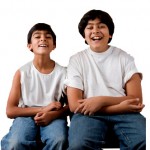 Although English speakers find that jokes are a lot of fun, they can make English second language students feel uncomfortable and embarrassed. Of course they are bound to feel like outsiders when their friends are all laughing and talking at once about a good joke.

People tell jokes at work, at parties, on the bus, on boats and at meetings. Families tell them at home and to their friends. People who can remember jokes are always welcome at a party. Some can even tell them with a poker face while others blow the punch line. Some give up the telling and read them. We don’t all tell jokes, we don’t all understand them but we all listen!
We all love to laugh. It’s good for our health. Now let’s consider the English Second Language student. He or she wants to laugh, too – probably needs to laugh through his or her struggle with English grammar, rules and exceptions.
Jokes are fun! Some jokes are a play on words that sound the same or almost sound the same. Although this is the case in many languages, it’s very difficult, even for the more advanced English student to “catch on”. Having the same type of joke in their first language doesn’t seem to help.
How can we help them?
As the type of joke offered in this article is suitable for the high intermediate or advanced students, let’s talk about jokes where pronunciation and or the play on words are the key. They won’t “get it” if they don’t hear the differences. We suggest that in the classroom the teacher tell the joke in the usual way. Then when there is a heavy silence and he or she sees the blank look on the student’s faces, encourage them to listen again. This second telling could perhaps emphasis the key sounds just a little. There will be a few students that “get it” at this point but for the rest we suggest that they see a printed copy. This will as least give them a clue about this kind of joke.

How about telling them this?
A man met his friend. “What’s new?” asked the friend.
The man had just bought a new hearing aid, so he was anxious to tell his friend about it.
“I just bought this new hearing aid,” he explained. “It’s the very latest technology, and is the very best you can buy. It was terribly expensive, though, it cost over $5,000.00.”
“That’s interesting,” said his friend. “What kind is it?”
The man looked at his watch and replied: “It’s a quarter to twelve.”
Talk to your students about jokes. Explain that some English speaking people also have trouble “catching-on” to a joke. Everyone has a different sense of humor so it’s not the end of the world if you are rather quiet amid all the laughter. Your best friends will likely understand your problem and they’ll either pretend they didn’t notice your discomfort or they’ll help you to “get it”.

Choosing an ESL Curriculum for Teens and Adults