Choose the best answer based on the information given and implied.

Social Media Use in Teens Linked to Poor Sleep, Anxiety.

According to a new study, the pressure to be available 24/7 on social media may lead to poorer sleep quality as well as an increased risk of depression and anxiety in teens. In the study, researchers asked 467 teenagers ages 11 to 17 about their use of social media during the day and at night. In other tests, they examined the teens’ sleep quality, self-esteem, anxiety and depression. They also looked at whether and to what extent the kids felt the pressure to be available on social media all the time. The researchers found that using social media at any point was significantly related to decreased sleep quality, lower self-esteem, and increased depression levels in the study participants. However, when it comes to sleep quality, “those who log on at night appear to be particularly affected,” study author Heather Cleland Woods, of the University of Glasgow in Scotland, said in a statement. Research presented at the American Psychological Association meeting in 2011 found a link between the use of social media in teens and traits linked to schizophrenia and depression.

In another study, published this year in the journal Cyber psychology, Behavior, and Social Networking, frequent social media use in teens was tied to an increased risk of poor mental health. “Since adolescence is a vulnerable period for development of long-term issues, it is essential that we understand how adolescents’ social media use relates to” factors like sleep quality and the risk of depression, the researchers wrote in the new study. Cleland Woods suggested that families use what she calls a “digital sunset”, to minimize the potential negative effects of social media use on sleep and feelings of well-being. “Turn off the devices and the blue light, stop checking emails and social media, and allow yourself time to finish your day,” she said. “Sleep is important, so put your phone away. “Still, Cleland Woods stressed that the use of social media itself is not a negative activity. “We all do it,” she told Live Science. “However, we need to think about how and when we are online.”
1.  By using the term “digital sunset”, Author refers to:

b) Sleeping before actual sunset.

c) Turning off the Television.

d) Turning off all gadgets which link to internet and social media.

2. Which of the following specifically describes the word “adolescents” used in the passage?

Source: [By A.W, Originally published in The Economist, August 2015]

Researchers at the University of Surrey, in Britain, and Linnaeus University, in Sweden, have published a new study highlighting what they call “a darker side of hypermobility”. The “hypermobile”—largely but not exclusively business travelers—have won a certain cachet in contemporary society, with the worldliness they seem to acquire from their travels and the envy-inducing social-media posts they leave in their wake. But, the researchers warn, “Whilst aspects of glamorization in regard to mobility are omnipresent in our lives, there exists an ominous silence with regard to its darker side”.

The study, which synthesizes existing research on the effects of frequent travel, finds three types of consequence: physiological, psychological and emotional, and social. The physiological ones are the most obvious. Jet lag is the affliction travelers know best, although they may not anticipate some of its direr, if rarer, potential effects, like speeding ageing or increasing the risk of heart attack and stroke. Then there’s the danger of deep-vein thrombosis, exposure to germs and radiation—people who fly more than 85,000 miles a year (say, New York to Seattle and back every three weeks, or New York to Tokyo and back seven times) exceed the regulatory limit for exposure to radiation. And finally, of course, business travelers tend to get less exercise and eat less healthily than people who stay in place. The psychological and emotional toll of business travel is more abstract, but just as real.

Frequent flyers experience “travel disorientation” from changing places and time zones so often. They also suffer mounting stress, given that “time spent travelling will rarely be offset through a reduced workload, and that there may be anxieties associated with work continuing to accumulate (e.g. ‘inbox overload’) whilst away”. Due to the absence from family and friends, “hypermobility is frequently an isolating and lonely experience,” the authors write. The accumulated impact can be substantial. One study of 10,000 World Bank employees found that the business travelers among them were three times as likely to file psychological insurance claims. Finally, there are the social effects. Marriages suffer from the time apart, as does children’s behavior. What is more, relationships tend to become more unequal, as the partner who stays at home is forced to take on more domestic duties. There’s a gender disparity here, since most business travelers are men.

Friendships also fray, as business travelers often “sacrifice local collective activities and instead priorities their immediate families when returning from trips”. Of course, these impacts are mitigated by the fact that they fall disproportionately on a segment of the population that is already doing rather well. The “mobile elite” tend to have higher incomes and access to better health care than the population at large. According to the study, in Sweden, 3% of the population accounts for a quarter of international travel; in France, 5% covers half of the population’s total distance traveled. So these may be problems of the 1% (or the 3%, or the 5%). But they’re real enough regardless. By all means feel jealous of acquaintances’ Instagram photos of exotic meals and faraway attractions. But harbor a small amount of concern as well.

3. Which of the following problems is NOT linked with hypermobility as per passage?

4.  Frequent long distance Travelers are more likely to get involved in which of the following Medical conditions?

5. Society envies the frequent travelers due to which of the following reason(s)?

b) Hyper-mobile elite possess a cachet in the society.

d) All of the above.

Countless studies have found that generosity, both volunteering and charitable donations, benefits young and old physically and psychologically. “Volunteering moves people into the present and distracts the mind from the stresses and problems of the self,” said Stephen G. Post, founding director of the Center for Medical Humanities. “Many studies show that one of the best ways to deal with the hardships in life is not to just center on yourself but to take the opportunity to engage in simple acts of kindness.” Studies show that when people think about helping others, they activate a part of the brain called the mesolimbic pathway, which is responsible for feelings of gratification.

Helping others doles out happiness chemicals, including dopamine, endorphins that block pain signals and oxytocin, known as the tranquility hormone. Even just the thought of giving money to a specific charity has this effect on the brain, research shows. Intuition tells us that giving more to oneself is the best way to be happy. But that’s not the case, according to Dan Ariely, professor of behavioral economics and psychology at Duke University. “If you are a recipient of a good deed, you may have momentary happiness, but your long-term happiness is higher if you are the giver,” Ariely said. For example, if you give people a gift card for a Starbucks cappuccino and call them that evening and ask how happy they are, people say they are not happier than if you hadn’t given it to them. If you give another group a gift card and ask them to give it to a random person, when you call them at night, those people are happier. “People are happier when they give, even if they’re just following instructions,” Ariely said. “They take credit for the giving and therefore are happier at the end of the day.” The way we give is important, too, Ariely said. Taxes are a form of giving that typically does not make Americans happy. “If you give directly from a paycheck, we don’t pay attention to it,” he said. “It’s the way we give and how we give that makes us happy. The key is to give deliberately and thoughtfully, so that other people benefit from it.” Research supports this, and researchers started from a baseline of equal physical characteristics among study participants, so it wasn’t a case of healthier people being more willing to volunteer.

6. Which of the following statements is NOT true according to the passage?

a)    People feel happy even if they have to be generous just to follow instructions.

b)    Charity benefits young and old physically and psychologically.

c)     One feels long-term happiness of higher level, if he/she is a recipient of good deed.

d)    The way we give and how we give is equally important to be happy.

7. “Mesolimbic pathway” is a part of the brain which gets activated when one thinks of helping others. Which of the following best describes the feelings generated as a result of this activity?

1. D
“Digital sunset” has been related to logging out of all online/social media applications and putting away the cell phones. Only choice D is the correct answer.

2. B
Adolescents are youngsters going through the process of developing from a child into an adult.. Hence, option-c and d are wrong. Option-a is too much a generic category. Option-c (Pubescents is the synonym) is the correct answer.

3. D
Options a, b and c have all been linked to frequent traveling in the passage. Mortification indicates Humiliation which is not faced by hyper-mobile people. Hence option-d is the correct answer.

4. B
As per passage, one of the physiological issues associated with frequent long distance travelers is “Jet-Lag”, which increases the risk of heart attack and stroke. Hence “b” is the correct option.  Option-a, c and d are wrong as these are not related to traveling.

5. D
All options a, b and c have been implied in the passage. General public fantasizes frequent travelling and being hyper-mobile due to tourism opportunities, exotic meals and lack of knowledge about the “darker side” of being hyper-mobile.

6. C
Options a, b and d have been discussed in the passage to be true. Option-c is a false statement since one feels long-term happiness of higher level if he/she is a giver not the recipient. Hence c) is the correct answer.

7. D
Studies show that when people think about helping others, they activate a part of the brain called the mesolimbic pathway, which is responsible for feelings of “gratification”. Best available synonym of gratification is option-d i.e fulfillment.

ESL Grammar Activity - The Past Tense

English Quiz for Beginners Listen and type the number of the correct answer. There are 10 questions. (1 mark each) You are doing well if your mark is 8 or … 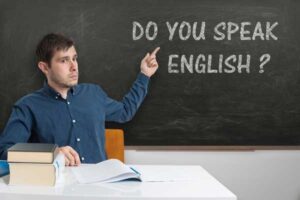