Many of the English grammar tenses are not too difficult but others give students a lot of trouble deciding when to use them. Since we can’t think through a grammar rule as we speak, the best way is to participate in activities with other students, speaking orally and using the tenses. This blog will provide some practice exercises identifying and using the present perfect tense. You may want to try some of them orally with a friend as well as doing them on your own.

This is part 2 – See part 1 here
My husband and I discovered the importance of learning in sentences years ago, when we went to Spain to learn Spanish. We’d been teaching English in Eastern Europe for some time and thought we might learn about teaching by sitting in the hot seat and learning Spanish. So while there,we learned hundreds of vocabulary words and many grammar rules, but when we went to the local café to order coffee we couldn’t put a sentence together. After stumbling through a series of word and finally getting our coffee we would sit and try to figure out what we should have said! 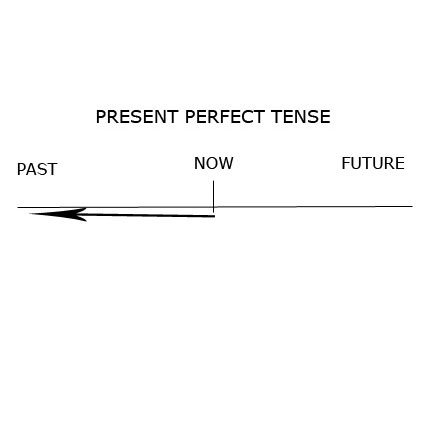 This tense expresses the idea that something happened (or didn’t happen) before now, at an unspecified time in the past. The exact time it happened is not important.
In the exercise below, identify the present perfect tense by choosing the sentence using that tense.(There may be more than one verb in the sentence.)

The good news is that frequently there is more than one tense would be correct.

Tutankhamun’s tomb has been of interest for years.
Archaeologists have died after entering the tomb.

1:  a.  Historically, Tutankhamun has not been an important pharaoh.
b. Tutankhamun was pharaoh for only ten years.
c.  Pictures show Tutankhamun when he is pharaoh.

4:  a. Tutankhamun was likely murdered.
b. The mystery remains, “Who has murdered Tutankhamun?
c.  Some archeologists believe that he broke his leg in a chariot accident.

5:   a. Tutankhamun’s spirit has killed the archeologists.

Complete the paragraphs using the Present Perfect Tense form of the verb in brackets. 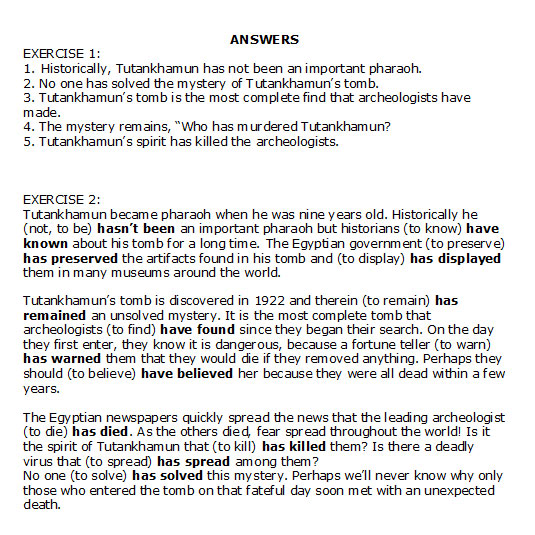 English Quiz for Beginners Listen and type the number of the correct answer. There are 10 questions. (1 mark each) You are doing well if your mark is 8 or …